Calibrate your levels on a regular basis even if they are not in use.
Wish to be updated?
Get Our Newsletter 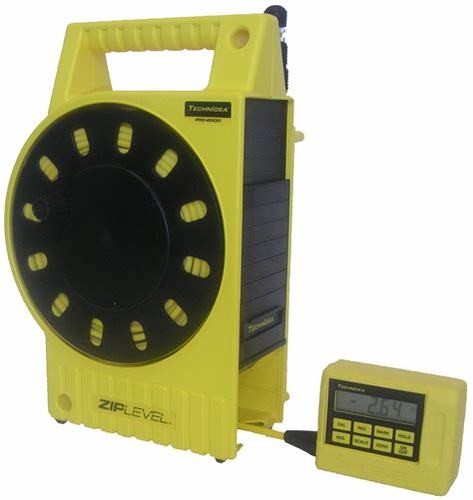 ZIPLEVEL® is a high precision pressurized hydrostatic altimeter. It works much like an aircraft altimeter that measures the weight of the air above it except that ZIPLEVEL does not use the atmosphere to measure elevation. Instead, ZIPLEVEL is a pressurized system that measures the weight of a proprietary liquid sealed within its Cord relative to a Reference Cell in the hub of its reel. This makes ZIPLEVEL 10,000 times as precise as an aircraft altimeter and immune from both barometric pressure and altitude changes. Its internal pressure prevents bubbles from desorbing from its liquid when under vacuum when the Module is above the Base Unit and is one of our powerful patented features.

Why ZIPLEVEL® is Replacing Rotary Lasers . . .

Much like a water level, the builder’s level and rotary laser simply create a flat reference plane that you hope is reasonably level if the instrument hasn’t been jarred out of factory calibration enroute to the job site. On the job where profits are measured in time, conventional levels make you work long and hard. Both the set up and pack up require five to ten minutes each due to tedious coupling, calibration and decoupling of delicate components while jockeying with one or more protective cases. This overhead often causes workers to avoid checking jobs leading to costly errors. To further complicate your work, the real world has hills, valleys, grading, excavations and visual obstructions. If you want to measure a change in elevation you must read and subtract numbers from a rod where larger readings mean lower elevations and smaller readings mean higher elevations. Visual obstructions require multiple setups, differential leveling and of course more error inducing, counter-intuitive rod readings and math. In all but rare exceptions, your work is done at a different elevation than the instrument height so you must have a rod man locate a laser beam while you, for example, adjust concrete forms far below. This is not the advertised one man operation . . . and don’t forget, you must frequently charge or change both laser and sensor batteries.

The revolutionary ZIPLEVEL® PRO-2000 is a high precision altimeter that not only levels but reads elevations in unmistakably clear digits while solving all of the foregoing problems. Savings start with the two second set up and five second pack up time so there is no excuse to avoid checking a critical measurement. A press of the Measurement Module Zero key anywhere within the 40’ vertical set up range sets an infinite size level benchmark plane. It’s like setting a laser instrument height at the elevation where you might wish to level. ZIPLEVEL adapts to you rather than making you adapt to a laser with a rod and sensor. You can instantly level or adjust forms by yourself for true one man operation. Elevations are displayed directly in your favorite scale with positive digits above and negative below your benchmark with 0.050 inches precision without math or line-of-sight. Because ZIPLEVEL technology is immune from tilted level plane problems, there is no need for factory calibration and no error with distance. In fact, ZIPLEVEL’s powerful Carry Function lets you measure over any distance or elevation on earth without tabulation or math. Our new dual range ZIPLEVEL can now detect the thickness of a sheet of paper with 0.005” (0.1 mm) internal precision for measurements never before possible. As a bonus, the rugged ZIPLEVEL runs for up to a year of typical daily use on a single 9V battery over temperatures of -22F(-30C) to 158F ( 70C) with storage to -40F (-40C), has 16 powerful built-in functions and a PC Serial Port.

With tens of thousands sold worldwide since 1996, a one year warranty (two year pro-rata on hydro-pneumatics) and a 30 day money back guarantee, why not join the measurement revolution? Now you can enter real world of the 21st Century with the affordable ZIPLEVEL® PRO-2000 and save time, reduce errors and cut costs.